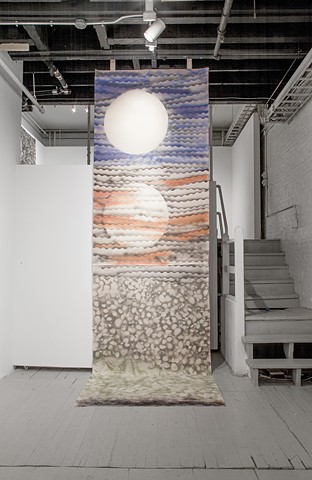 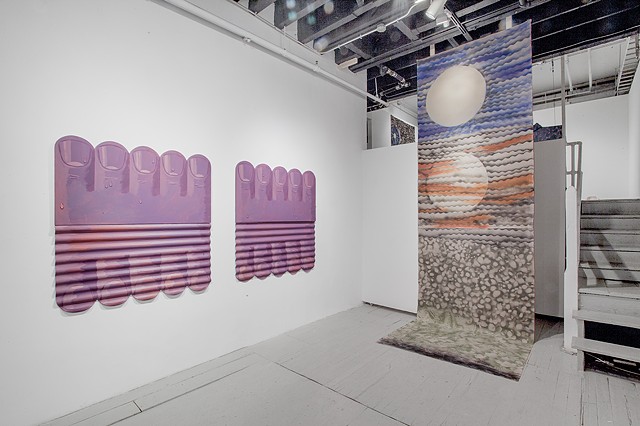 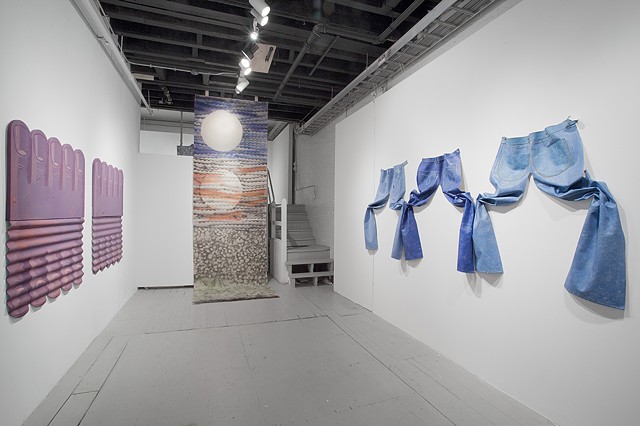 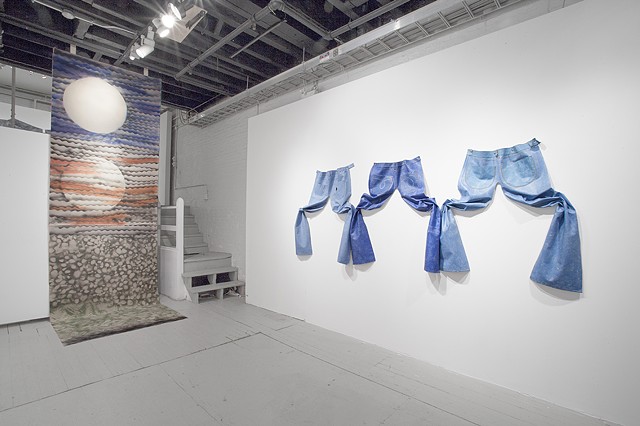 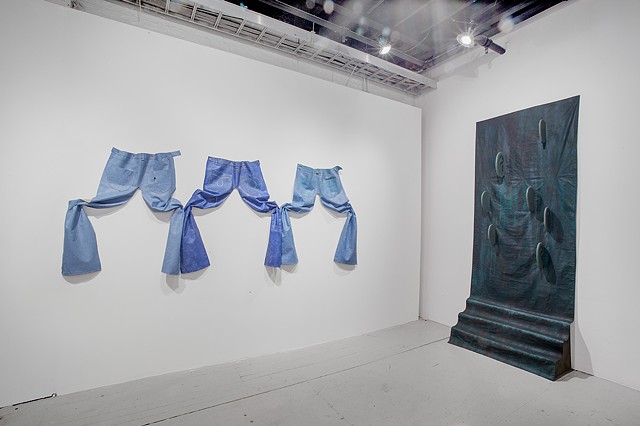 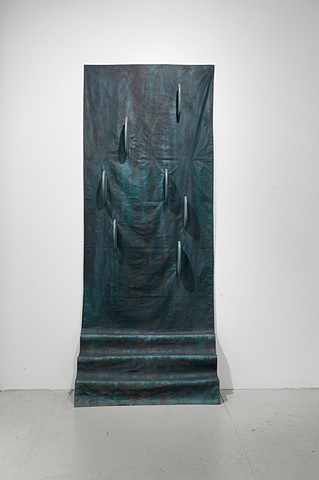 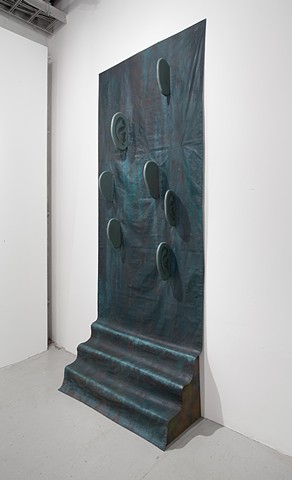 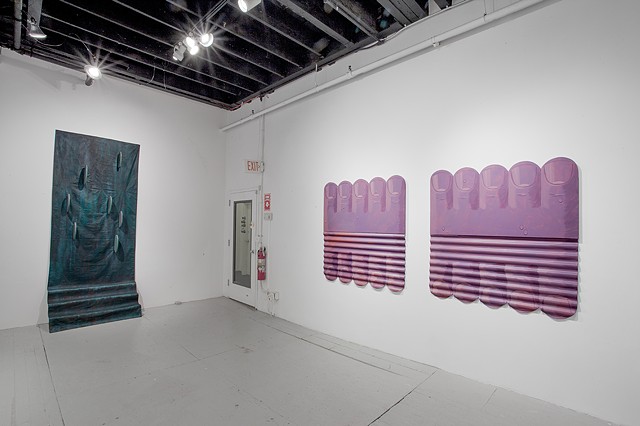 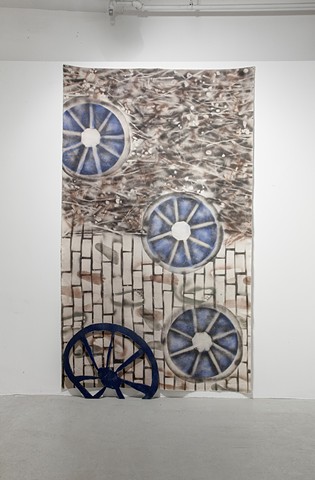 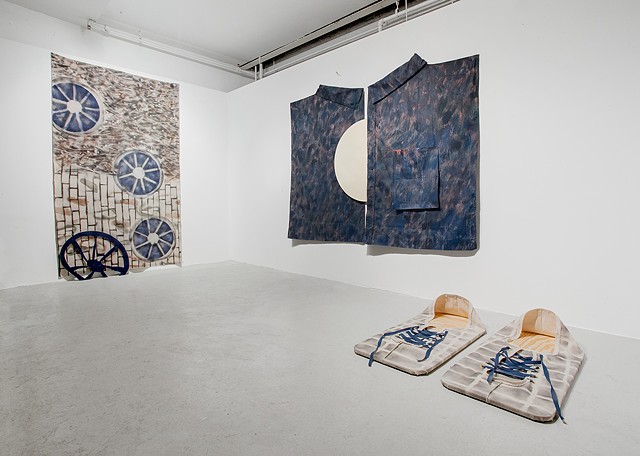 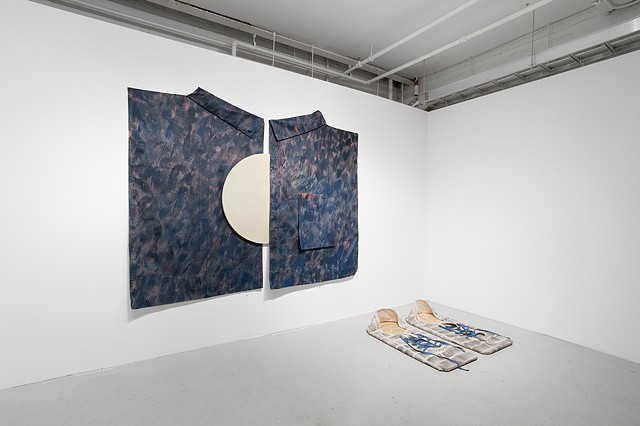 Consider the form of an artifact, the material in which it's made – A right eye, a left eye, after right eye, after left. One needs to make those decisions. Paint eyes simply to keep things living, and in searching find the spectacles while tapping trees for the oil of the fragrant crotch that melts as it's rubbed into the wood and our new style –

Set swallowed a bit of Horus' semen (indirectly, on a lettuce leaf) and gave birth through his forehead to a golden disc, the moon which, rising in Uranus at my birth, accounts for my love of precision.

Proof Gallery is pleased to present Sun's Hideout, new works by Boston artist and curator Susan Metrican. Metrican's work, which straddles painting and sculpture, often to humorous effect, earnestly attempts to breach the fourth wall - the implicit agreement between stage and audience which maintains the stage's fiction as real. In her constructed world, the moon peek-a-boos from a tremendous shirt, that is also the sky, that is again a color field painting pierced by a void. Day slips into night and into day again in the space of a single scrim. Dripping toes lit by the violet hour are reflected beneath by rippling water or is this an encounter with cartoon props, remnants from a scene just performed?

Metrican's play with space and dimensionality is born as much of a desire to re-construct a remembered world as it is to ask questions of our perception of the world. As in theatre, the allusion to truth is more important than fidelity to it. The moment of the spectator, the act of spectating, the piecing together what is seen, is where the action is.

Susan Metrican's work includes painting, sculpture, and video. She is one of the co-founders of kijidome, an experimental collaborative and project space in Boston, and in 2013 was the sübSamsøn artist-in-residence at Samson Projects. She had a solo exhibition at Boston University in 2014, and has been featured in group and solo exhibitions in New York, DC, Vermont, Chicago. Metrican has independently curated and co-curated exhibitions in Boston, and is currently the Curator & Director of the Arts at the Women's Studies Research Center at Brandeis University. She holds a BFA from the Kansas City Art Institute, an MFA from Massachusetts College of Art and Design and was a participant at the Skowhegan School of Painting and Sculpture in 2014.